Jean Pierre
Alex Sibley
Javier Fabian
Team No Sleep
Loammi
If there was one word that could describe the talented DJ and Producer Jean Pierre, it is passion. Born and raised in the concrete jungle of New York City, this 'Borough Beatman' from Queens has done nothing but live and breathe records that transform his sets into riveting musical journeys.

At only 28 years old, Jean Pierre's music has become globally recognized by its mature sound that is well beyond his years. Not only is he one of the most popular talents in the very competitive NYC club circuit, but he has also found praise in South America and Europe alike. He has graced the 1's and 2's while visiting international destinations like Spain, Germany, Ecuador and Colombia. Jean Pierre has also played for crowds numbering in the tens of thousands in Colombia's infamous Black & White Festival, one of the biggest electronic music gatherings in all of South America.

Since then, he has had many productions and remixes featured on labels such as Defected, Nervous Records, SK Supreme, Infamous Recordings, Waveform Recordings, among others. He has received support from A-list talents such as; Loco Dice, Luciano, Marco Carola, Gary Beck, Steve Lawler, Santos, Mike Frade, Bimas, Yaya, Joeski, Nicole Moudaber, and Victor Calderone. 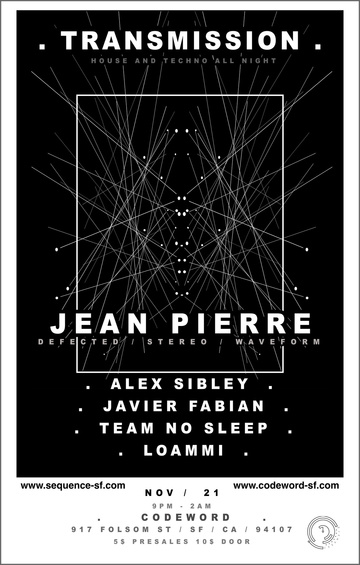